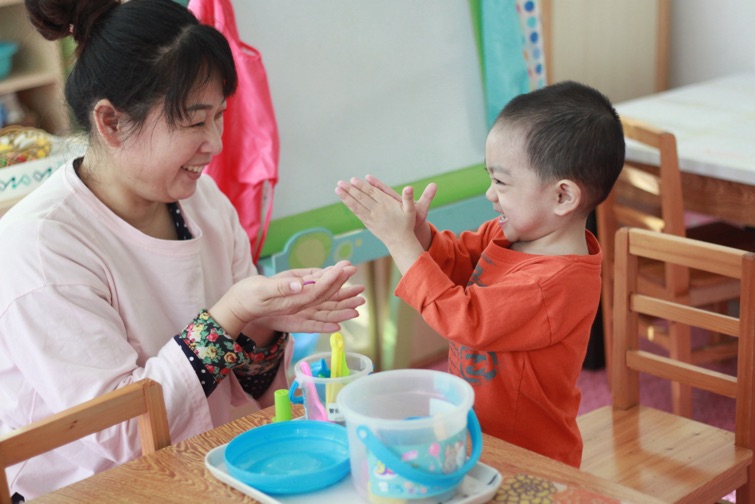 It is January 24th, just a few days before Chinese New Year kicks-off and the yearly mass exodus of the city begins. Most people will return to their hometown, somewhere around China, some people will have their new year celebrations with their family in Beijing, you will also see a few foreigners dotted around, clearly enjoying the quieter roads and subway. Some people though, will be working and today I am visiting the dedicated team at Dew Drops Little Flower children’s home, who will be giving up their Chinese New Year with their families to stay and take care of their thirty-one kids.

I’m travelling up to the children’s home on Beijing’s extensive subway system; it takes about an hour and a half from the city center, 3 train hops and a Dididache ride (China’s Uber) to get there. It’s a clear day, no pollution, but freezing cold.

As I arrived, one of the volunteers, Rebekah Bodden, is waving my car down from the side of the road; it’s quite far out of the city now, mainly fields and a few buildings spread along the roadside.

I see the Dew Drops Little Flower logo displayed on the wall, but apart from that you would never guess there are 31 kids, 10 caregivers, 5 support staff inside. Stepping through the door I’m transported into a bright, friendly and warm environment, in stark contrast to the cold, grey winter Beijing outside.

After washing my hands and removing my shoes, Rebekah gives me tour of the carefully planned out facilities. “In the first few rooms we have the smallest babies”, she says, some of them have serious medical problems, some were born prematurely, all of them were abandoned at birth. That is normal here though, all the children that Little Flower take on are orphans with some sort of medical issue ranging from the severe to the physical.

Like many countries, China does not have a national health service, so for many families having a child with health issues can mean huge financial instability. This is compounded by the size of China, with rural cities that don’t always have the best doctors and facilities, forcing families to travel to places like Beijing in order to get much needed operations. Some families will have to put all their money into their child’s operation, with little left to cover time off work, travel expenses and hotels nearby the hospitals.

The wall next to the babies’ rooms has photos showing their development, it is clear there has been a major improvement since they first arrived. This is in no small part down to how Little Flower operates; the caregivers work in shifts with the smallest babies, to make sure they have 24-hour care. Unlike some more traditional children homes, who do not allow nurses to pick the babies up, Little Flower’s caregivers spend as much time cuddling, kissing and playing with them as possible, replicating the parental love they sorely need for their development.

The next room along from the smaller babies’ nursery is a classroom to allow the older children, from ages one to five, somewhere to learn and develop their cognitive abilities. I was a little surprised at how good the classroom was, but perhaps I should not have been. Little Flower is well funded from donations and sponsors. They budget around 30,000 CNY for each child’s medical bills per year, plus the direct cost of the caregivers, accommodation and facilities. They currently have thirty-one children, but have the capacity for up to forty. When I heard the costs I started to understand why some parents had little choice but to abandon their new-borns, right there in the hospital where they were born.

Past the classroom we enter the main play area, where the one to five year-olds are messing about with their toys, playing games and generally causing mischief. Some of the children’s medical issues were obvious, but many are already well passed any danger period and playing, running, screaming like any other child of that age.

I ask who the oldest one is and Rebekah points out a taller boy near the back of the play area who is five and a half. His life and death struggle is typical of the work Little Flower does. Abandoned at birth due to a heart defect, Jia was in a rural orphanage during his first couple of years, but later moved to Little Flower as they could not provide the medical attention he needed. His heart defect meant his blood could not circulate properly and walking up and down the stairs would cause his face to turn a shade of blue.

Little Flower was able to organise heart surgery for him, which was successful but the week after the surgery he suffered a brain stroke, causing paralysis and loss of sight. This deeply effected the staff, who felt at the time they had lost their little boy. But one day during the daily singsong activity, he unexpectedly responded to the other children by clapping with them, the caregivers were surprised to the say the least. Slowly over the following months he has begun to regain some of his abilities including walking, but still has poor eyesight.

Hearing Jia’s story made me wonder what would have happened to him if Little Flower was not there to provide care. I cannot imagine his story would be the one of hope it is.

Another big difference between Little Flower and a regular children’s home, is how they replicate a family within the main group. Every caregiver is responsible for three children; they eat, sleep and play together in a family unit. The rooms upstairs have three children’s beds and one adult bed, so when the kids wake up they have a familiar face and most importantly a routine to provide them stability.

They also keep a few spare rooms for families to use for free, whilst they visit Beijing for their children to get healthcare at one of the bigger Beijing hospitals.

Anyone who visits Little Flower will not fail to be struck by a sense of awe at the work they are selflessly doing. It is important, lifesaving work, done in a loving and well organised way. Their challenge might be overwhelming, with an estimated 100,000 abandoned children each year in China, but Little Flower is persistently and carefully doing their part, and has already helped thousands of children.

The hope is that each of the thirty-one children in their care will be adopted into a loving family, but until that happens, each of them has a home at Little Flower.

If you would like to help, consider one of the following ways; Sponsor a child, donate or give one of the many things they need. If you are in Beijing, it’s possible to visit them, give up some of your time to go and play with the kids, it is a rewarding experience for both sides.

I am entrepreneur currently living in Asia. I love building engaging and impactful web platforms! A web enthusiast and tech nerd, I write on this blog to try and pass on some of the knowledge I have been lucky enough to use to earn a living over the last 10 years. View all posts by Alex

This site uses Akismet to reduce spam. Learn how your comment data is processed.